Prior to Machu Picchu, we were switching hotels every 1 to 2 nights and constantly on the move. Cusco was our first place where we had some time to slow down, relax and enjoy.

One of the first activities we did was visit the Ccochahausi Animal Sanctuary. This sanctuary rescues endangered and/or abused animals and nurses them back to health in order to release them back in the wild. If you haven’t guessed by now, I have a soft spot for animals, so this was a place I was excited to visit. There was an English-speaking guide there who showed us around and explained a little about each animal. There were alpacas, llamas, bobcats, pumas, condors, foxes, macaws and some other animals.

The alpaca was really soft like a teddy bear!

My favorite, of course, were the white bobcats!

According to Minh I did a lot of squealing when I saw them. Haha. They are full grown adult white bobcats and are smaller than a lot of house cats. They even meow like regular housecats! Wish I could take them home, they’re so cute! Unfortunately, they are wild cats and you can’t pet them.

There was also an area with Andean Condors. They are really massive birds with big wings. The guide told us that many of these birds were poisoned in an attempt to kill them as they are considered a nuisance to farmers as they attack their livestock. Also, many poachers go after the birds in an attempt to sell their feathers, as one full wing can sell for thousands of dollars.

Here’s a video of one of the Andean Condors, this one is actually considered a “baby” at just 25 years old. There’s an adult one up at the top that was about 75 years old. 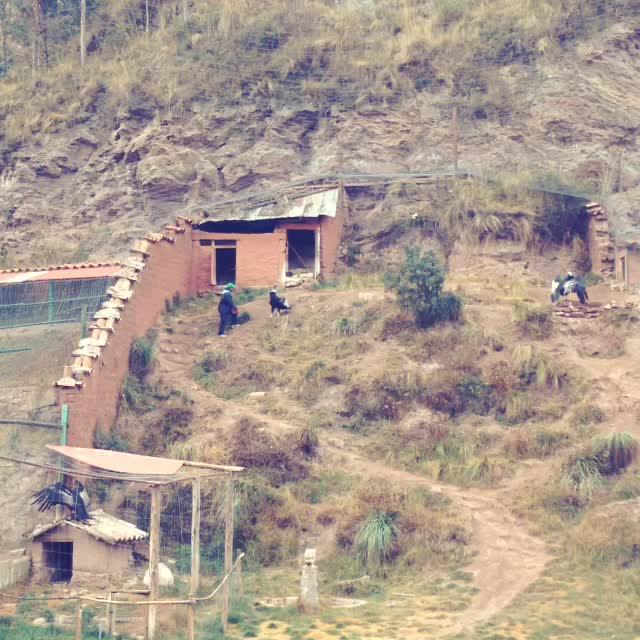 After the animal sanctuary we took a collectivo to Pisac. Another fun collectivo adventure in Peru – this time we are told to just hail one down from the side of the road – it works! Pisac is another ruin site that’s about 45 minutes away from Cusco.

Look at the amazingly square and smooth rocks they created – they look like lego blocks.  There was even a little Flinstones living room couch!

Up until this point, Minh and I have been hiking almost everyday up various sets of stairs, rocks, hills, tiers etc, but elevation really got the best of us here and we were huffing and puffing the entire time. We didn’t even have this hard a time when we were at Machu Picchu. The elevation is no joke in Cusco!

Luckily, Minh and I didn’t experience any altitude sickness. I think a lot of people experience altitude sickness because they fly into Cusco and stay there first before going to Machu Picchu. Cusco is actually the highest elevation city, so we planned out our schedule to make Cusco our last stop to get ourselves adjusted to the elevation.

After flying into Cusco, we went directly to Ollantaytambo for a night, then took a train to Aguas Caliente (the base of Machu Picchu), and then went to Cusco last. This planning seemed to help out in avoiding getting altitude sickness for the both of us.

The day we were to depart Cusco, we arrived at the airport and there was no airline info for our flight on the monitors. The terminal was really crowded and whenever Minh would try to get info from the gate agents, they would give him the runaround and not really answer him. It seemed really chaotic at each gate, and nobody knew what was going on.

While we are in the waiting area for our flight, we hear a bunch of people at the gate in the corner start yelling and then they start rushing from that gate to another gate across the terminal. It’s now a bunch of people from the first flight trying to bust into another flight that is about to board. The passengers start arguing amongst each other and people start chanting in unison! (in Spanish, so not exactly sure what they were saying). I think it was something along the lines of demanding to be let on the plane. People are really upset and nobody knows what is going on. At this point Minh and I still have no information on our flight, so Minh tries to find out. The gate agent recognizes Minh and tells him “Your flight has been cancelled, go downstairs now to rebook your flight.” This is really bad news for us as we actually need to catch a connecting flight to Santiago, Chile.

It turns out, they cancelled two flights and there are no more available flights that day. We try calling to have our flights re-ticketed but they tell us they can’t give us a hotel or meal for the night and it needs to be done at the check-in counter. Because we were on the phone with the airline, we end up being the last ones in line to get our flights re-ticketed and we are in the airport for another 4 hours. Thankfully, the airline puts us up in a hotel and re-tickets us for the next morning. They also give us money for cab fare to get to the hotel and back to the airport. The gate agent gives us 30 soles and we tell her that’s not enough for both ways. Minh tells her the cab drivers overcharge us since we’re Asian and we don’t speak Spanish that well. She’s shocked when we tell her how much they charged us to get to the airport. She comes back out with another 10 soles.

Now that the airport is basically shut down, we have to walk out onto the street to hail a cab to take us to the hotel. There are police outside directing traffic and he sees us and asks if we need a cab. He hails down an unlicensed cab for us (umm ok), and tells us it will cost 10 soles. The unlicensed cab driver drives through a super sketchy neighborhood and I’m hoping he’s taking us to where we need to go. I see a “Wyndham” sign pointing up the hill and a breathe a sigh of relief. When the cab driver drops us off in front of the hotel, he says it’s 20 soles. -_- We keep saying no, policia said 10, he just laughs at us. Literally just laughed in our faces as there’s nothing we can really do.  We only have a 20 sole bill, as we keep trying to insist on the 10 sole price, he says he only has a 5 and gives us 5 back. As predicted, we got charged more than we should have.

The next morning we arrive to the airport and it looks like some other airline’s flights are getting cancelled! Our flight is delayed about 30 mins, but our flight thankfully doesn’t get cancelled again. It seems that Cusco airport is much too small for the amount of traffic that goes through it, and cancelled flights are a regular occurrence. It was a very exhausting ordeal and while we thoroughly enjoyed our time in Cusco, we’re glad to finally be on our way to our next destination – Santiago, Chile!