After checking off touring cappadocia from a hot air balloon off our bucket list, we had the rest of the day to explore the rest of Göreme and what it had to offer.

The most well known “attraction” after hot air ballooning is the UNESCO World Heritage site, the Open Air Museum that once served as a monastery to monks.

It had lots of small rooms with churches, common dining areas, etc. that you could walk through.

An interesting fact seen in the photo below: there were people (self chosen hermits) who lived in the open air museum.  They would receive basic necessities from the neighborhood and monasteries despite having nothing to do with the church or working – wow!

The walk back to our hotel from the Open Air Museum provided even more entertainment as there were lots of fun things to observe – animals (horses, dogs, chickens, etc), other (free!) structures that looked very similar to the ones at the Open Air Museum, and various pottery places.

Pottery seems to be a local craft, and a well known dish of the area is pottery kebab.  Pottery kebab has to be ordered ahead of time, as the food is slow cooked in a sealed ceramic container in a kiln.  We went to a pottery kebab place recommended by our hotel and they helped us call our order in ahead of time.

Shortly after we sat down, our waiter brought out 3 small ceramic containers containing our slowly simmered meat and veggies and cracked it open right at our table.  It was piping hot and he poured each serving out onto a plate for us to enjoy! 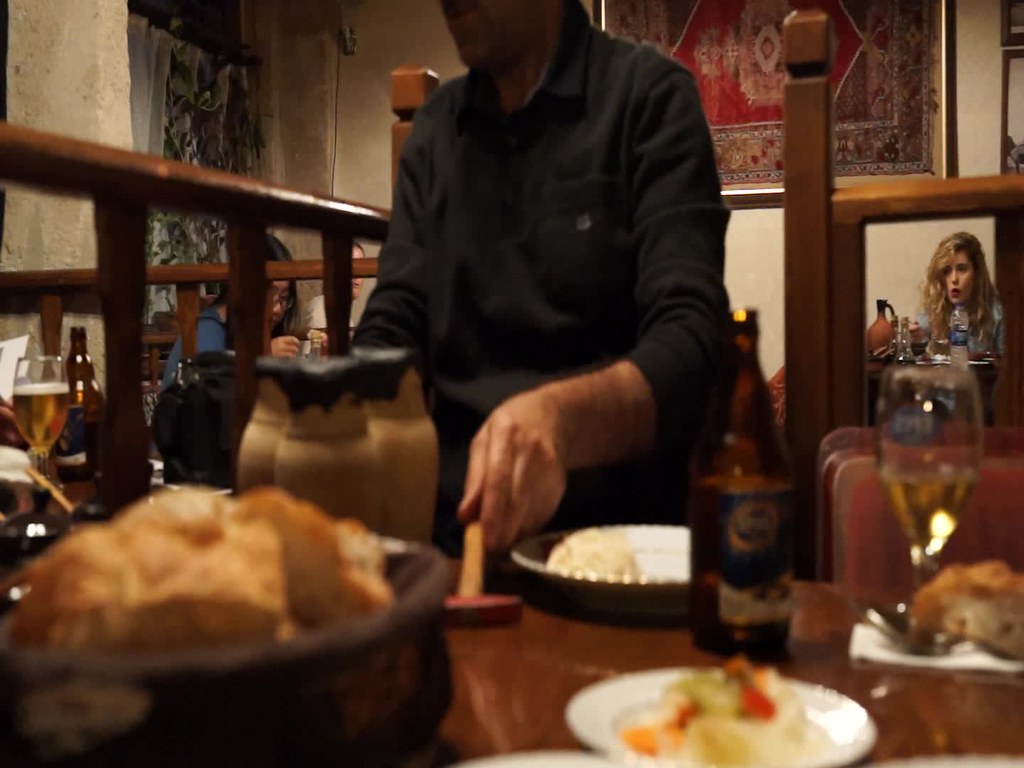 It was a nice hearty meal to eat on a cold night, and was a unique dining experience that seems to be the specialty of the area.

The next day we went to explore more of the area and took a local bus to Paşabağ.  Once we arrived, we noticed a bunch of camels and “tourist trap” vendors, so we actively avoided the area and went to the left instead. We walked around and climbed up a hill that had some great views.

After walking around for a while, the 3 of us felt a little bored and started wondering if we were in the right spot, as it only took us 15 minutes to see everything.  We pulled up our trusty google maps to verify if we were in the right place – we weren’t!  It was directly past the camels and “tourist trap” area we intentionally walked away from – of course!  We should have known that we wouldn’t be able to avoid it!

Lots of cute tourist merchandise with lots of non-copyrighted characters 😉

Once we got there, there was much more to see.  It felt pretty similar to the Open Air Museum that we visited the day prior, with lots of small cave-like rooms.

While walking around, two ladies say something to me and Connie in Turkish, and we assumed she was asking us to help her take a photo.  It turned out they wanted a picture with us!

Right after we took a photo with them, another random guy asked us if we were American.  I’m guessing there aren’t many Asians, or Asian-Americans that visit that area, because apparently we were a big deal!  Was a weird but interesting experience to have people be fascinated by you just for being you!

After walking through Paşabağ, we took a hike that took much longer than we anticipated over to Çavuşin.  We read somewhere online that someone had walked from Çavuşin to Paşabağ, and figured we could do it the other way.  It took us a good hour or so to walk, while the sun bore down on us, with no shade to take refuge in.

Once we finally reached Çavuşin, we grabbed lunch at a restaurant that had an outdoor patio.  A super friendly kitty decided to join in on our lunch (yay!).

The cat jumped over from my lap to Connie’s after it saw she was done eating and licked up the rest of the sauce from her plate!

While sitting there, we noticed a huge historical looking structure across the way, and asked our waiter what it was.  His reply: “some old house” Does it have a name? “no”

After lunch, we go to explore said “no name old house” that the locals seem to not be impressed with, and the three of us are excited and exclaiming how cool it is! lol.

While climbing, we see a bunch of people at the top and are trying to figure out how to get to the top, as it doesn’t seem like there is an easy pathway

We spent a good amount of time trying to figure out how everyone got up there (including senior citizens), and eventually figured out that we needed to go back down and around to get to the top.  While at the top we saw a few other groups trying to figure it out and saved them the trouble of hopping around dangerous cliffs and told them the route they needed to take.

After exploring, we had such great views from the top that we decided to stick around and catch the sunset. We grabbed a cab home and called it a day.  Overall, a great day of walking, hiking, and climbing through historic landscapes!